Kenya law Reform Commission welcomes you to the 2014 Nairobi International Trade Fare which will be held at Nairobi Jamuhuri Park from 29th September to 5th October 2014. The theme for the show is 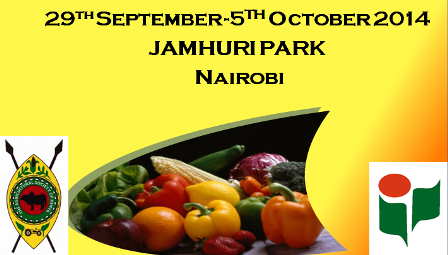 which support agribusiness ventures.  We have partnered with the Ministry of Agriculture, Fisheries and Livestock Development to prepare: - The Agriculture, Fisheries and Food Authority Act, 2013 [No. 16 of 2013]; The Crops Act, 2013 [No. 13 of 2013]; and The Kenya Agricultural and Livestock research Act, 2013 [No.17 of 2013]. We have subsequently worked with the State Department of Agriculture to prepare the attendant Regulations to give further and specific effect to the above pieces of legislation especially to enhance their operational frameworks.  These modern laws and regulations to develop are designed to among others enhance technology based agriculture.

We cannot overemphasize the fact that the Agricultural Sector is the biggest employer in the country and has a potential to grow. To demonstrate the first assertion, one will in life ordinarily encounter a Doctor, Policeman, Lawyer or Teacher once in a while but you will literally meet a farmer three times a day in order to survive! as in  during breakfast, lunch and dinner.

As NITF opens its gates for the members of public this Monday, make a date with us and visit us at the Jamuhuri Show ground.